Argentina’s generation of the players like Lionel Messi, Higuain, and Tevez seems to come to an end with this year’s FIFA World Cup 2018. But that’s not something to worried about as the 24-years old striker. Paulo Dybala has kept things talking with his superb goals flow at Juventus. What’s more to it is, Dybala, touted as the next Aguero is equally impressive when it comes to playmaking and assists. Often taken out as the next big thing in Argentina football or someone very much close alike regarding skills, the Juventus star has kept his case strong with winning Serie A and Coppa Italia twice each at Italian bigwig club. 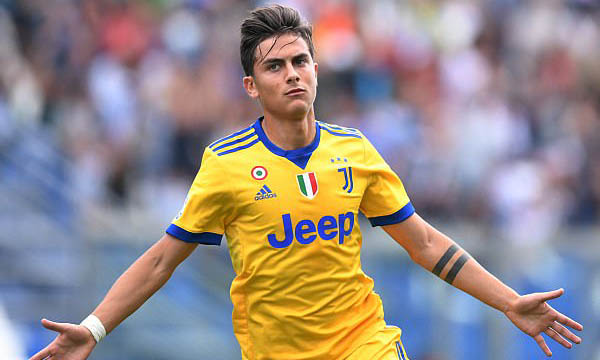 Even though Dybala’s power show with Albeciste has not been that much convincing but that couldn’t hamper the repute he carries on the field.  Just on 12 games for Argentina, the second striker has remained goal-less, but still, he makes him one of the hottest prospects to look out for in the World Cup 2018. Previously played for the clubs like Palamero and Instituto de Córdoba, and now playing for Juventus. The rising Argentina star is often linked up with Manchester United ever since his mate Pogba is there.

Born and bred in Laguna Larga in Cordoba, Argentina, Dybala had a go for the game of football right from day one. And that pushed him exhibiting his talent in local football grounds and pitches nearby his home.  Unlike many others star player, he wasn’t snapped up by some bigwig club under their youth system and had no specific club enrollment until he turned 17. According to the sources, what all Dybala wanted was to play football. He was living very much up to the dream with a ball attached to his feet and walking, running or even jumping in the areas nearby.

At the age of 17, Dybala snapped up by local club Instituto. And it was actually the game changer for the aspiring football star.  His Primera B Nacional, Argentina’s second division debut went superbly as he stood tall as the youngest player to score for the club with overthrowing Mario Kempes.

The promising Argentina striker is a talent not to miss out on and that’s the thing he has been in the limelight since his teenage.  To be very exact, Dybala went on showing his heroics on the football pitch since the age of 4. With the things moving on and he getting on board with the prominent club Instituto under-19 he just went on becoming better and better.  The urge to do big stayed with the wannabe footballer since his childhood and with no deviation coming in there things were pretty well working for him.

It should be kept noted here that with various nationalities on board. And offers of pursuing national team, the Argentina-born took a bit longer to come up with his decision. Following that he had to decline to play for the Argentina under-17 and under-20 even when he was there in the plan. 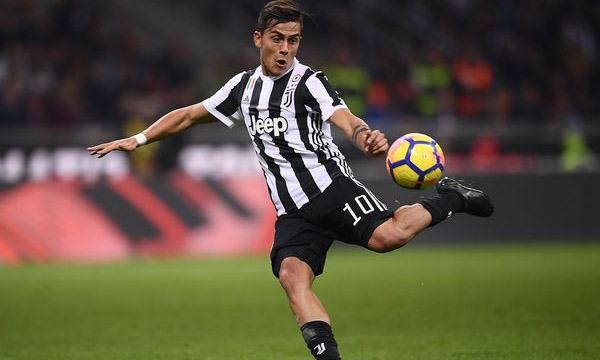 Dyabala’s talent has been the talk of the town since his days out with Instituto de Córdoba or even something before than this. The only thing which might have stopped him from donning the Albacete was his own decision. As he had the opportunity to either play for Italy and Poland other than Argentina. The choice of making his national team debut was bugging in Dybala’s head as he actually restrained himself from playing for Argentina under-17 and under-20 sides. But didn’t decline to play for the senior Argentina side and finally his journey for Argentina kicked off On 13 October 2015.

The combo of Juventus and the rising Argentina star is something to closely look after as just at 22-years of age. The young man assigned the number 21 shirt Which previously worn by the Juventus legend Andrea Pirlo. Dybala, after his move to Juventus from Palermo, he didn’t take that long to outshine his opponents as he went on scoring 19 goals off 34 games. And that was pivotal in making sure Juventus lift 2015-16 Serie A. The very next year in terms of Serie A turned out to be the replica for Juventus, and so it was for Dybala. Now under the latest contract extension that came into action in May 2017, Dybala is all set to showcase his talent at Juventus by 2022.

Paulo Dybala’s fitness and accuracy is something that makes his stand tall among other world-leading strikers. But what weakens his case is the injury intervention that has been keeping him away from the football pitch every now and then. Although, the year 2017 turned out a fair one for the rising striker. He wasn’t caught in some sort of injury that could curtail his game for the Juventus.  But up the latest in around 1st week of January in 2018 had to leave the pitch in tears due to strain in right thighs. What’s more to the story is now, Dybala, touted as next Sergio Aguero is up with his rehabilitation and seems to make a comeback within a month time.

The transfer doesn’t seem very much on the cards for Dybala as Juventus seems to under their wings for long. The latest contract extension he got in at the Italian big wig club was in April previous years and after all this; he is most probably to stay under their wings until 2022. At the same time, one can’t deny the fact that Manchester United is keeping an avid eye on the promising striker. Especially after Pogba’s departure to the Red Devils from Juventus, Dybala often linked up with the Old Trafford Club. The reason is Paul Pogba and Dybala had great understating on the field. The duo has been lethal for the opponents while they were together at Italian bigwig club.

The roots Dybala belong to are something that needs to be known by around his every fan as it has strong links with his career.  Dybala’s grandfather was from Krasnow in Poland but later relocated to Argentina during World War II. On the other hand, he also has some strong relation with Italy as well as his maternal grandmother; Da Messa is from the Province of Naples in Italy.  Talking about Dybala, he was born and nurtured in Laguna Larga in Cordoba, Argentina but as he started finding his pace right he had to look up onto which national team he should go after as around three nationalities were there on for him just a click away.

With options in front, the Dybala bit delayed the process of national team debut as he couldn’t be there in for Argentina under 17 and 20 as well. But finally, he made it into the Albacete national side in 2015. Even though he opted to represent Argentina, he feels a strong connection to his roots, to whom they refer to as ‘my family’s blood.’

Just at 24 years of age, Dybala has much to be talked about in this section. As the handsome buddies, high profile love affairs have always been the talk of the town.  At first relation with model Antonella Cavalieri stayed in the limelight for long. And after it all came to an end it was his relation with Givera Sozzi that made its way into the headlines. The sizzling Sozzi had not much to do in star footballer’s life as it was a short stint that was over with Dybala getting on track with his former girlfriend. 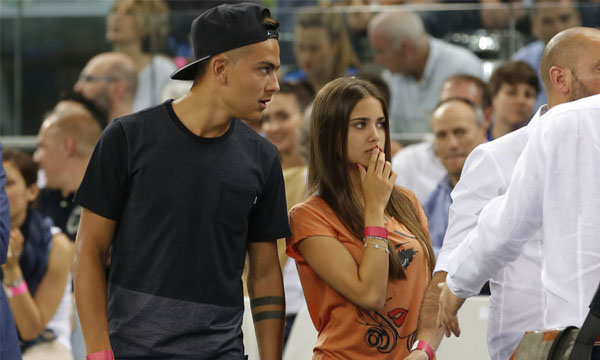 The model has been very much part of Dybala’s life from past several years, and the thing is both have been equally vocal about each other.  The shutterbugs have been coming up with the photos of this couple now and then. And that made them prominent enough to touted as one of the most looked after Football lovebirds.  Dybala seems living his life to the fullest with his girlfriend Antonella Cavalieri until things went off and the rumors about their breakup went on buzzing around.

The actual reason behind all this wasn’t known at all. The only thing which spread like fire in the bush was Dybala’s relation with Ginvera Sozzi. The Argentina striker’s dating scene with the hottie Sozzi soon went over. And as of now, he’s back with the former girlfriend, Cavalieri.

Dybala has been one of the calmest and composed promising strikers on and off the field. And that is something that has kept controversies miles away from him. As everybody has lean patches, there was one for Dybala too. And that actually fueled up due to misinterpretation of statements. Dybala in an interview told that he and Lionel Messi doesn’t have a great relationship as the legend remains in himself most of the time and doesn’t talk with him very much. This taken as a disrespect back in Argentina as the promising striker was misinterpreted.

Dybala was good enough to grab the limelight with his superb performances with Palermo. And then came something even bigger and better for the star footballer. Actually, it was Dybala’s move to Juventus, who paid €32 million for the striker to the Sicilian club. The debut year power show was enough by Dybala to prove his worth up to this price tag. As he ended up his debut Serie A campaign with 19 goals and nine assists.  No with two tremendous seasons already gone, Dybala bestowed with a contract extension in May 2017. Which would have to keep him over there until 2022.

The flamboyant striker is all about grace and style apart from his football talent. Same goes off with his off-field choices, most prominently for his cars collection. Which includes some of the most fantastic automobile giants, namely, the promising star keeps Range Rover, Mercedes, and Audis in his collection.

With three citizenships to his name, Dybala is living most of his time in Italy and Argentina as his football priorities have tied him to do so. It should be kept noted here that Dybala has an exquisite house in Turin, in Italy. That is the city he has been living most of the time throughout last several years.

The Argentinean striker has three nationalities to his name; Argentinean, Polish, and Italian.

Paulo Dybala allocated the number 21 shirt over his arrival at Juventus; this was the short previously worn by legend Pirlo.  Now after Pogba’s move to Manchester United, Dybala dons number ‘10’ jersey.

Dybala given the nickname ‘La Joya’ which means ‘the jewel’ in Spanish. Moreover, he regarded as the next Sergio Aguero on the football pitch.

Manchester United seems to keep a strong eye on Dybala and with even things working well in their favor. It seems the Juventus striker can join the ranks of the red devils with his former teammate Paul Pogba.