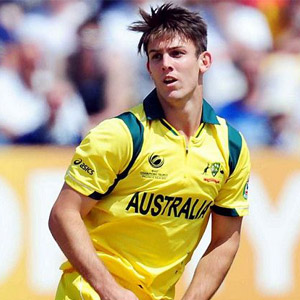 Australian cricket team’s number 6 found has just got prolong with injury intervening now and then in Mitchell Marsh’s budding career. When fully fit, turns automatic selection for the Australian team in all three formats, son of Geoff Marsh and brother of Shaun Marsh have shown the ‘X-factor’  to become the answer to Australian’s quest of a proper all-rounder. The injury intervention has always been leg-pulling the flamboyant all-rounder, who first taken as more of the bowling all-rounder. And later on, with making Test debut against Pakistan, he showed the glimpse of batting techniques with scoring 87 and 47 in his second Test. 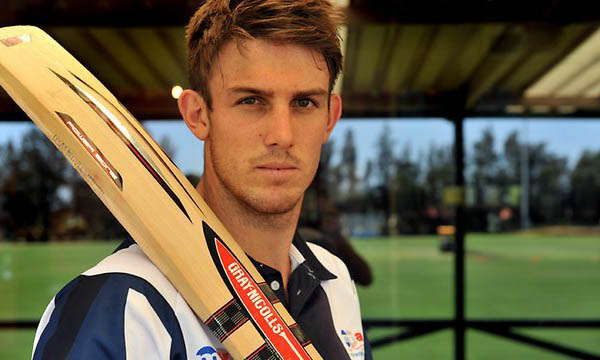 At the same time, one can’t overlook his 5-wicket haul against England in ODIs, and the thing which worked as icing on the cake was his brilliance infield as well. His sudden arrival in the Aussie team for third Ashes Test 2017-18 severely criticized but reality remained opposite very much to the expectations. The young Marsh went on winning it for Australia with scoring 181 and settling 300+ partnership with skipper Steve Smith. Only 26-years old Marsh has the experience of playing different formats in different conditions, as he has very well done in IPL and BBL as well.

The young and enthusiastic kid, Mitchell Marsh didn’t have cricket as the priority game. Born with sporting capabilities, Marsh was equally good in paying Australian Rules football. His cricket talent wasn’t a hide, and that too came straightaway from his father Geoff Marsh, the former Australian Test cricketer. While growing up, he had the chance to see Australian cricket dressing rooms from close as his father was up with coaching responsibilities that time. The only hurdle in between Marsh and his cricket career was blackness of seriousness for the game of cricket. With even becoming a late starter at domestic cricket age of 17, Marsh became the youngest player to debut in Australian one-day circle, with representing Western Australia in February 2009.

The youngest of the Marsh family born to Australian Test cricketer Geoff Marsh and Michelle Marsh, Mitchell always got the much-needed guidance about his career from family. Elder brother Shaun Marsh, who had exposure to cricket earlier made it to the Australian team and also made a name for himself in the prestigious Indian Premier League. On the other hand, sister Melissa Marsh burst into the sporting fame as a professional footballer, who played at the women’s National Basketball League (WNBL) and State Basketball League (SBL).  Mitch’s father had also been very much supportive in grooming Mitchell Marsh as a cricketer. Talking about his lads, he marks both of them way different from one and another. The attitude issue has been there very much for young Marsh, and his father has even backed him as he thinks players of such eagerness and energy are the requirement of modern-day cricket.

The shutterbugs have been right in the slot when it is about the relationship status of the stars. Even though, if they want to keep it away from the limelight, they can’t as photos kept on floating on social media. During his teenage, Mitch had a relationship with Emma McCarthy, which didn’t last that long. The reasons for things getting over between the young Marsh and Perth-based real estate agent sales executive aren’t known.

Moving on from this short stint, Mitchell Marsh got into relation with Isabelle Platt. This year’s long relationship between two of them has remained very much in the limelight as star cricketer has been vocal about all this over the years. Isabelle has featured along with Mitch at different events including the Alan Border Medal ceremonies.

Emma McCarthy has become the talk of the past for Mitchell Marsh as he looked on and got himself into the relationship with Isabelle Platt. The same way Miss McCarthy has also moved on and is currently about Aussie off-spinner Nathan Lyon. What might have affected Mitchell from Lyon’s ongoing relation is trolls hitting him now and then as his ex is now in the relationship with his teammate. Not creating the mess out of the situation, Bison isn’t very much bothered about all this as things are going well in between him and McCarthy.

Many of the cricket fans are hasty enough to take on Isabelle Platt as Mitchell Marsh’s wife and why not they should be as the lady-love is often seen along with the star cricketer. And what adds more to all this is Miss Platt is also regarded as the part of Marsh’s family as she has also got things right on the spot with Mitch’s parents. With things all set in between the couple, one can predict soon the marriage on cards for the lovebirds.

Undoubtedly, Mitchell Marsh would have been the top priority of Australian cricket team across all formats, but what have curtailed to all his brilliance was the frequent intervention of injuries. The latest in the list long injuries for Mitch were the shoulder injury, which derailed his flourishing career in March 2017. The devastated Marsh forced to miss the IPL and other of the national team series due to this injury. What added to the ordeal of this young man was a long wait to get back to the cricket field as shoulder reconstruction required at least six months.

Talking about this stoppage to his career, Mitch said: “I certainly had moments throughout my shoulder rehab when I thought I wouldn’t get back.”   The timely arrival back to the domestic cricket and scorning regularly runs for Western Australia turned out to be the sigh of relief for him as finally he was called up in the Ashes squad 2017-18 midway.

Mitch Marsh’s controversial out against New Zealand in the decider of the ODI series sparked debate as the ball hit the boot after hitting the bat.  Even though the appeal wasn’t that strong, he was given out by the TV umpire.

When Mitchell Marsh was called up for the Aussie squad for third Ashes Test match, many of the critics slammed the decision and so was former Aussie fast bowler Rodney Hogg, who said ‘It’s a kick in the butt for Maxwell.’

Mitch who was making a comeback to the national team after more than a year-long hiatus and that too for the Ashes Third Test, a dropped catch and wicket-less bowling fueled up his haters to the fullest. This all went on until it came Marsh’s turn to bat and he added 181 runs with the bat.

Amid the ongoing Third Ashes Test, trolls were very much active, especially against Mitchell Marsh, who was making a comeback to the side. England’s barmy army took things to next level as they tweeted,

with my hand inside her bra

having fun with Mitch’s ex

she says I’m much better at sex.’

This bitter take from English fan army came when Lyon asked to replace Mitch as he is going wicketless. Not to forget, Lyon is currently dating Emma, who is Mitchell Marsh’s ex.

As the Australian cricketers are one bunch of highest paid cricketers on the planet, so is the case with their latest star Mitchell Marsh, who has done way more than the expectations. The 26-years old, who seems to be on the right track, seems to earn big in the coming years and with all getting in his lap, one can’t deny the glimpse he showed to be the next big thing in Australian cricket

The flamboyant all-rounder, previously known as more of a party-guy is living it with style as he keeps many of the modern day cars in his collection. His cars collection includes some of the prominent cars like Audi, Mercedes and Range Rover in his collection.

It took a bit for Marsh to secure his place in the Australian XI as there has been a long going fight for the Kangaroos 6th spot.  At first, taken as a handy pacer, the younger Marsh showed more of his batting glimpse against Pakistan. The injury has been the other factors, which kept him out of the contest for the Aussie squad but that didn’t happen for long as selectors were forced to rethink to get him in for the Ashes 2017-18 after Handscomb failed to live it up to expectations. Now the twice time century scorer in the Ashes series, Marsh outsmarted the haters with his consistency with the bat.  With the experience of 24-Test Matches on his shoulders, Marsh seems to have cemented his place as of now in the Australian squad.

When it comes to the T20’s, he is a handy all-rounder, who can bring destruction to the opponents on his day. Same goes his campaigns at BBL, where he has been winning the hearts and matches as well for the Perth Scorchers.  The average over tad 40 in 25 games, Marsh has been the consistent performer for Scorchers. What makes his case even stronger is coming up with a bowling option for the T20 bigwig side.  It should keep noted here that Marsh’s performance at BBL has been pushing him in the plans and eyes of Australian selectors.

As his elder brother went on making a big name for himself in the prestigious Indian Premier League, Marsh followed the steps very much and tried to get the game going on. Hardly, he could do anything good enough to remember for that long, but still, teams like Delhi Daredevils and Rising Pune Supergiants invested their belief in him.  It will be pertinent to mention here that he was ruled out of the IPL 2017 due to an injury and later on opted to not to be the part of the event to remain more focused with the domestic cricket.

A sudden arrival for the Third Ashes Test left cricket fans talking as Mitch only had the batting average of ‘22’, whereas the one he was going to replace, Peter Handscomb had the average of 45+ plus in Test cricket with the bat. Marsh turned the tables upside down and shut the critics with his superb 181 runs innings against England. Not to forget, he maintained 300+ runs partnership with Steve Smith and that played a pivotal role in Aussie’s win against Three Lions. 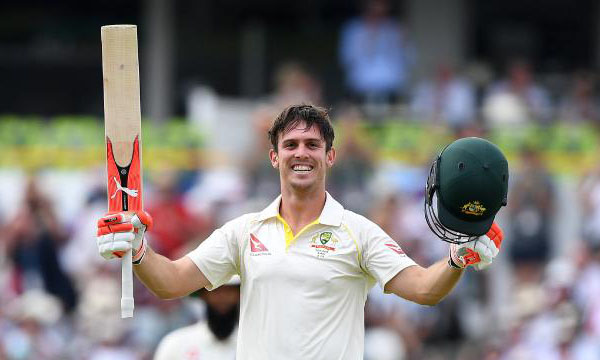 The Marsh brothers have been more of the best friends and are known to help each other on bad days.  Whether it is about late out party celebration or playing cricket at Wesley College, both the brothers have been standing with each other hands-in-hands. Similar to it, Shaun scored a classical century in 2nd Ashes Test match and shut the critics, the younger bro, Marsh following his way struck 181 in the third Ashes Test and did the same treatment towards the critics.