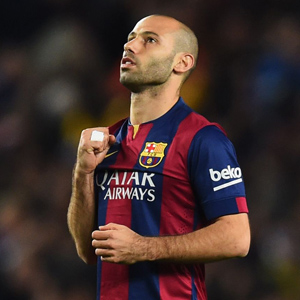 Javier Mascherano is a big gun to look out for when it comes to the defensive slots on the football pitch. The 33-years carries on with a massive reputation as he has won around everything possible with his decade-long allegiance with Barcelona. Apart from this, he also stands tall with his national team Argentina as he has donned Albeilsite at five Copa America events, three world cups, and two summer Olympics. 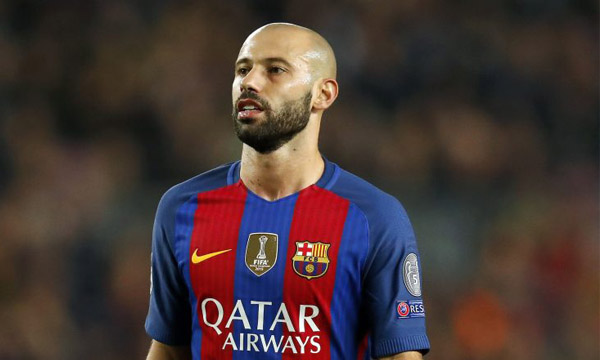 What’s more to his story is, he’s the second most capped player for Argentina after Javier Zanetti with his 135 appearances.  And is also the first male footballer to win gold twice back-to-back at Summer Olympics in 2004 and 2008.  The only thing that would have been bugging in his head, for now, is will he be able to grab the spot for FIFA World Cup 2018 or not?

Mascherano’s top years at La Liga club have powered them to win four La Liga championships, two FIFA Club World Cups, two UEFA Champions League Titles and much more. And now with around eight seasons at the Spanish club, it seems that it’s time for  ‘El Jefecito’ (The Little Chief) to bid adieu to the club and get on to find a new place for himself.

The Argentinean legend has lived up to the hype since his arrival at the club and as of now the reduced game time somehow suggests that Mascherano will be eying to have a new place, a new club for him.  The two sides which are upon to grab the veteran into their ranks are River Plate, which is one of his first clubs, on the other hand, Chinese side Hebei Fortune favorite to get Mascherano on board.

Mascherano’s talent was not a hide for River Plate, which tuned in to his first club but at the young stage, he was taken out as a bit of revelation in the local scenarios. Keeping football as bae since the young age, the Argentina star went on fulfilling every of his desire and that too very soon.

It should be kept noted here that Argentina star was bred and nurtured at River Plate youth system, and he later went on showing off his skills at the under 20 at the same club. What’s more to his story is even before making his senior team debut at River Plate, Mascherano made his international debut for Argentina.

Mascherano was bred and nurtured at River Plate youth ranks. Most specifically he was part of the under 20 over there. It should keep noted here that the central defender’s alliance. With the Buenos Aires-based club just went on honing Mascherano’s skill to the fullest. And what came next was not something ordinary as even before making his first-team debut at River Plate. He had already made his national team debut with Argentina.

And even before that, he had been a prominent figure at FIFA U-17 World Championship 2001 for Argentina. Where he played a pivotal role in finishing fourth at the mega event.  Even after making his senior team debut in 2003 at a friendly. Mascherano went on playing the 2003 FIFA World Youth Championship. 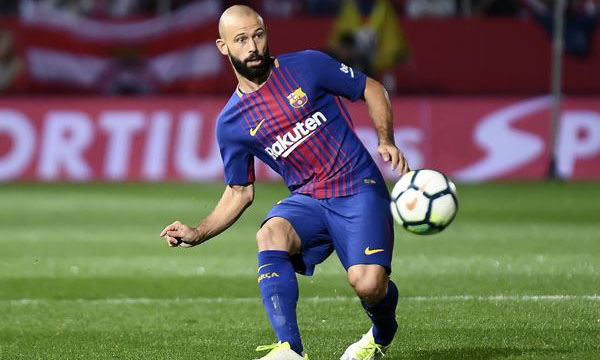 The only thing which would better let you know about Mascherano’s allegiance to Argentina’s national team. He is the second most capped player for Albiceleste after Javier Zanetti. Mascherano’s 135 appearances for the national side are kind proof. That what a crazy talent he has been all those years.

To be very exact, it’s around 15 years of Mascherano in Argentina, and within all this time. He has represented Argentina at five Copa Americas and three FIFA World Cups. What’s more to the star player’s perfect story with Argentina. He also stands tall with winning gold medal twice at Summer Olympics in 2004 and 2008. The 14 number jersey wearer star has also served as the captain of Argentina between 2008 and 2011.

Argentina’s central midfielder’s decision to leave Liverpool back in 2010-11. Turned out to be a blessing in disguise that made his way to the chapter. Which paved his way to glory and achievements.  Mascherano’s time at La Liga big wig club sums up to something around a decade. And what he has contributed to making this club prospers is a must-story too look out for.  In his eight seasons with the club, Barcelona’s full central defender has won two FIFA Club World Cups. Two UEFA Champions League titles and last but not the least four La Liga titles. It will be pertinent to mention here that all these essential years. Mascherano has been the top priority for La Liga, but currently. He has been kept in lines as a non-starter that has somehow gestured him to find a new home.

It’s kind of most crucial time of Mascherano’s career. You can’t guess things aren’t working very much in his favor as of now. What all he would be expecting in the current situation is a new team for him. Would be like new hope to the twilight of his career.  Due to the muscle injury back in November 2017, he sidelined for around a month. Which made him miss at least seven games.  Even the new year hasn’t been that required solace for the defensive star. As due to the Muscular game he had to miss one more game. Now with things lining up for World Cup 2018, Mascherano’s top priority will be to remain in top form. And fitness to be in the plans for Argentina national team for the mega event.

The one thing which is clear as of now is its time up for Javier Mascherano at Barcelona. The next question which pops into mind every one of his fans. Is that what would be next on the cards for the star player. The rumors of his ending allegiance with the La Liga top club has been making rounds since last several months. And his statements which like crystal clear worked out as fuel to this. Now with months and days passing. It seems the cat will be out of the bag as soon as some reliable sources have suggested. That is two weeks time, Mascherano will be getting into his new side. What’s even more to all this reliable source is that. The Argentina star is most probably eyeing to join Chinese side Hebei Fortune.

Mascherano is a pure football-manic for sure, but off the pitch, he carries on repute as the pure family man. In one of his recent interview, Mascherano revealed that around each of his decision whether it’s about career or something else reflects his family approaches not alone himself at now all of them are decided at the family level. Mascherano, who is married and up two kids have always been careful regarding his future decisions.

At the same time, Argentina star’s former club Liverpool claimed that actually Mascherano’s decision of getting off the club was taken by his family.  Up the latest, he’s up with the decision to make a move to China, as expected the decision would be taken up with keeping up the family priorities on top.

It won’t be wrong to say that there is nothing much to deviate Mascherano’s attention on the football pitch as he has kept himself miles away from all these sorts of troubles.  Moreover, he walks in with the repute of a one-woman-man, and the only one which seems to be making her life complete is Fernanda Mascherano. As of now, it’s been more than a decade since they are together after tying the knot, back in 2008.

Who is Javier Mascherano Wife? 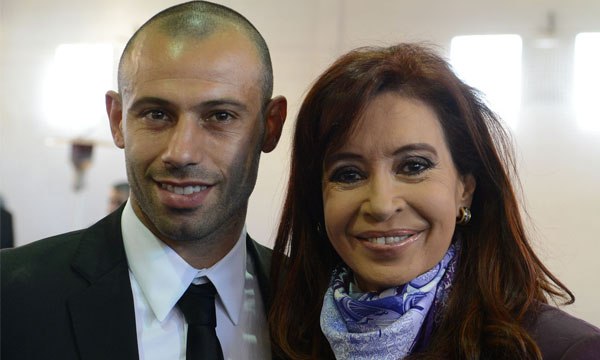 Javier had a short dating scene with Fernanda before they tied the knot in 2008. It will be relevant to mention here that Fernanda also blamed for Mascherano’s decision of leaving Liverpool in a bitter way and joining the ranks of Barcelona. Although, joining ranks of La Liga club turned out as a blessing in disguise for Javier.

After spending three seasons for Liverpool, it wasn’t regarded as the sharpest move of Mascherano to join Barcelona. Actually, his ties with the Premier League club weren’t on the spot as the manager over there asserted that the Argentina star was actually selfish in his actions.

The time went into fell in Mascherano’s favor as he went on winning and collecting laurels with his years of glory at La Liga club.  The other thing which might have hampered Mascherano’s repute is the tax fraud issue that might have ended him up in the jail. But the footballer went vocal that he isn’t much aware of the legal issues and tax payments, the people close to him might have misguided him as his all devotion and knowledge is solely about the game of football. Apart from these controversies, the Argentina veteran walks on the pitch with a positive repute, even among his opponents.

His allegiance to Barcelona made him stand tall enough among the world best central midfielders and defenders. The same is the situation when comes to raking moolah as the Argentina national has been taking £130,000 home every week under his latest contract with Barcelona. And even if he makes a move to China for sure that would be about big money. Although, it should be noted here that Mascherano in one of his latest interviews told that now in his career money doesn’t matter that much.

Isn’t a showy footballer right from very young and that has made Javier Mascherano way different from many other modern-day footballers. Even though he has all the utilities and luxuries on the go, but still Mascherano doesn’t prefer flaunting them now and then. The former River Plate star has some best modern-day car brands in his collection including the Audi, Range Rover and Mercedes.

The football star hailing from San Lorenzo is living top of his career in Barcelona and his family. Which includes wife and kids seem very much adapted to all this. His luxurious house in the center of Barcelona is actually delighted to watch as it comes along with all the modern day facilities.

Javier Mascherano is a household name in the field of football. But actually, his nickname isn’t very much according to his doings. Nicknamed as El Jefecito (The Little Chief), the Barcelona star is nothing short of a giant on a football pitch. The other surprising plus interesting fact about the Argentinean veteran. That he made his senior national team debut even before his first-team debut at his first club, River Plate. The other thing which makes him even more prominent on the board is his second most capped player in Argentina’s history after Javier Zanetti. It should keep noted here that Mascherano has made 135 appearances for Argentina. Which are just short of eight games to Zanetti’s 148.