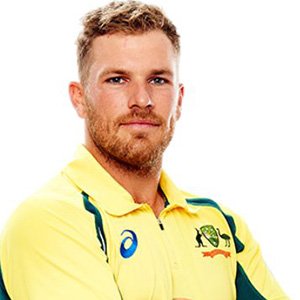 Aaron Finch, one of the most consistent T20 batsmen Aaron Finch, has become a household name for the Australian Cricket Team.  At first, only limited to T20Is, Finch has to rid away of the particular ‘T20 specialist’ term, which has given him a confirm berth in the Australian team even in ODIs, when he’s fit.

Once the T20I captain for Australian cricket team became the automatic selection to the yellow-golden outfit for some time. With his superb role during India Tour, 2017 after getting recovered from injury proved his value as one of the regular openers alongside the Australian vice-captain David Warner. Next on the cards will be a daunting task for Finch to get a baggy green cap for himself. Even though he hasn’t done well in this format in the domestic circles as far now, but one can expect this spot coming up for him as his sensibility in building ODI innings shows a glimpse of a Test batsman in the making. 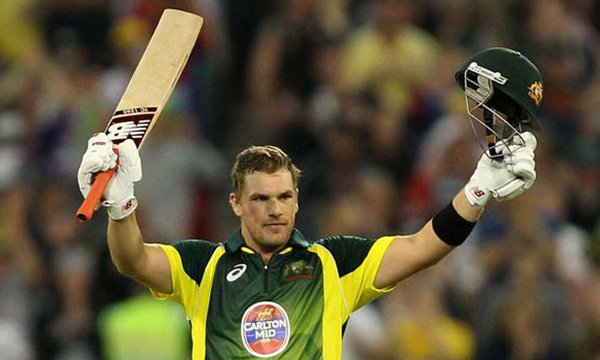 The hunk was ready to take the challenges right from the very first day and what gave him a much-needed boost was the support from his parents, Sue and Gary Finch. He is one of three children born to the Finch couple; other two are Jess and Matt Finch. The youngest of the Finch siblings, Jess has completed his graduation year back from the Deakin University. Finch, who went on becoming the part of the Aussie side, which won the ICC World Cup 2015 feels indebted to his family for their immense support which always remained there for him in every thick and thin.

He was never behind anyone when it was about outsmarting even the elders in the cricketing field. Just in his primary school, he is known for his competency with the bat. At the start, Hh paid more of his attention establishing himself as the wicket-keeper batsman. But soon he realized it wasn’t his cup of tea as he was all-known for changing the game within no time with his power-hitting skills. Things commenced for Aaron Finch during his Victorian Primary School days, which used to play in Darwin. The next on the cards were rep games for Finch, who made a string gesture with his flow of runs. 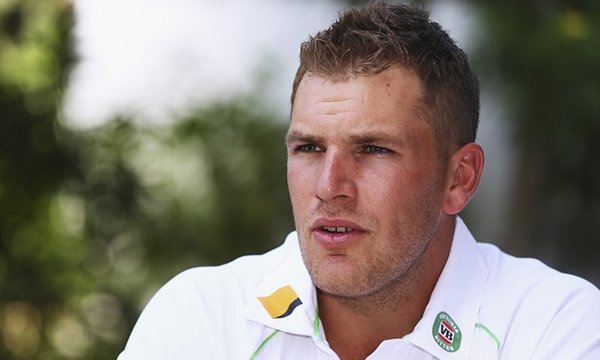 Finch’s amiable nature and easy going make him a prospect on and off the field for youngsters and his teammates. He had great bonding with the teammate Glenn Maxwell, who used to share Finch’s house in Melbourne’s North West. Talking about his experience with Maxy, Finch revealed that spending time with middle-order batsman was fun for him. The flamboyant opening batsman was the mother of the household as he had to do up the cooking and the cleaning stuff.

Finch himself is a witty guy who takes life easy but plans for things wisely. His nature is quite same as his T20I performances; it is aggressive regarding the strike rate but composed and consistent when it comes to the average.

Things took turn another way for Finch when he gets a hell of stressed up and frustrated, and the bitter part was all that getting out on the people back home. As nothing is permanent, this lean patch wasn’t either for always there.

The Aussie opener has remained very much vocal about his relations, whether it is about his past relations or the one who is going wonderfully as of now. Since he has made name revolving in the domestic and international circles, he had known for dating an Indian girl, to whom he met in Mumbai. Actually, the un-named girl worked in an entertainment channel and had the family settled in Melbourne. Later on, after meeting first time in Mumbai, the mystery girl and Finch started dating. This soon wrapped up and that was something more consolidating and long-lasting for the flamboyant Aussie opener.

Finch’s relation with Amy Griffiths gave him the much-required guidance and stability, during the lean days of his life. And this made the better understanding between the couple. 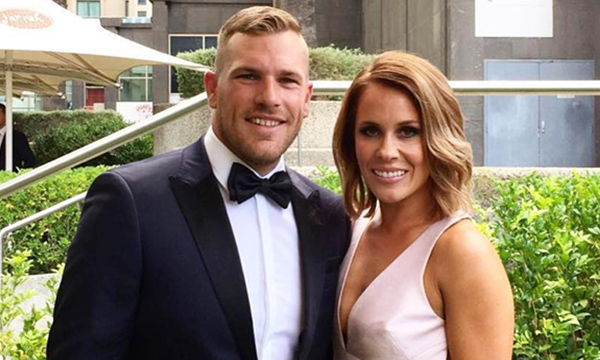 He isn’t married as of now, but with getting it done from the busy cricket schedules one can expect his marital status turning married from single. The lucky girl seemed none other than Finch’s girlfriend turned Fiance Amy Griffiths. The engagement between the couple takes place during one fine evening in India when Finch was there to play IPL 2016 season. Griffiths joined him in India when he was busy out there playing IPL. The couple took to social media along with the Griffiths flaunting the engagement ring.

Who is Amy Griffiths:

Aaron Finch has one house in Melbourne South West, whereas details about his investment property or other possessions aren’t known. Finch’s Melbourne house has always been in the news as Australian all-rounder Glenn Maxwell had been sharing this space with Finch for quite some time. According to the reliable sources, the Melbourne Renegades opener is living with his girlfriend, Amy Griffiths in the Melbourne house. 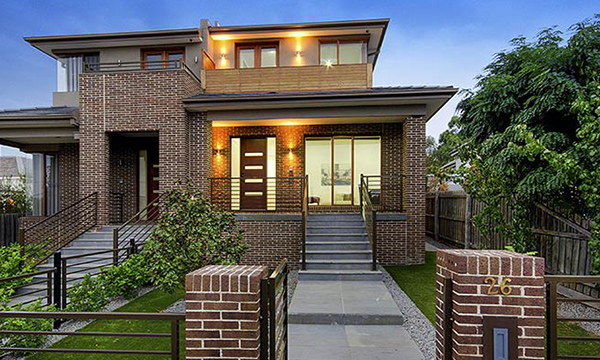 Aaron Finch has been a household name in Cricket Australia T20 circles, and now in past several years he had also turned out to be a must pick in the ODI format of the game.  His ability to mold himself according to the situation around has provided him the opportunity to play 85 ODI matches so far. Finch, who previously has remained the T20 captain for Cricket Australia along with becoming the number 1 batsman in T20Is, is now the consistent member of Australian ODI and T20I squads.

At the same time, Finch is upgrading his repute as T20 star across the globe with eye-opening performances in the leagues like BBL and IPL. Finchy has been part of the Melbourne Renegades in BBL and Gujarat Lions in the IPL.  All this has been adding big to the bank power of Finch, and in upcoming years one can predict boom of the net worth of the Aussie star. According to the reliable sources out there, Aaron Finch has an estimated net worth of $5 million + as of now.

Aaron Finch knows how to save himself with even staying in the limelight. The flamboyant opener, who had trouble years back of getting hyper within no time, has more of the control and calmness within himself and that has made him keeping things on a lighter note.

Amid the pay dispute with Cricket Australia, He took a dig against Cricket Australia with saying  “Off to London… See you soon @surreycricket. I’m just happy to be employed!” after joining the Surrey for the NatWest T20 Blast.

During a T20 match against South Africa back in November 2014, he survived a flamethrower blow when he was just there to pick the ball outside the boundary. Finchy put the question on Cricket Australia’s safety tactics towards the players.

He posted a photo of the broken glass in team bus after Australia team was coming back after winning the 1st T20I at Guwahati against India.

Aaron Finch, while growing up always wanted to become a wicket-keeper and for that purpose. He spent big time working behind the stumps.

He was also part of the ICC Under-19 World Cup 2006 among the players like David Warner, Moises Henriques, and Usman Khawaja. No doubt, Aaron Finch has been part of the IPL 2010, which is around a year before his T20 debut for Australian Cricket team in T20Is.

In 2013, his 156 against England in a T20I match entered his name in the record books. It becomes the highest individual score in a T20I match. On the other hand, this mighty innings comprises of 14 sixes. Which are the most number of sixes by an individual in a T20I game.

The Aussie opener also holds the record of hitting maximum fours in a T20 innings with smashing 14 fours against India in the Rajkot encounter. He stood up for his side with scoring 89 runs against the Blue Shirts.

He was part of the MCC teams, which played against the Rest of the World. It will be pertinent to mention here that Finch stole the show with his match-winning 181 runs amid the likes of Brian Lara, Shane Warne, and Sachin Tendulkar. Finally, he has also been the avid follower of the AFL, where he supports Geelong. Aaron Finch knows a bit of Hindi language and can speak the Hindi words like ‘Shukriya, Chikna, Badhiya, Theak Hain.’

Things started for Aaron Finch when he started playing for Victorian Primary School team that played in Darwin. The next on the cards for young Finch was the rep games and with becoming the consistent performer. He made his mind clear towards pursuing cricket as a profession. Later on, Finch started playing as a wicketkeeper for Colac West Cricket Club as a junior. His consistency with the bat got him the chance to play for the Australia under-19s at 2006 Under-19 Cricket World Cup in Sri Lanka. 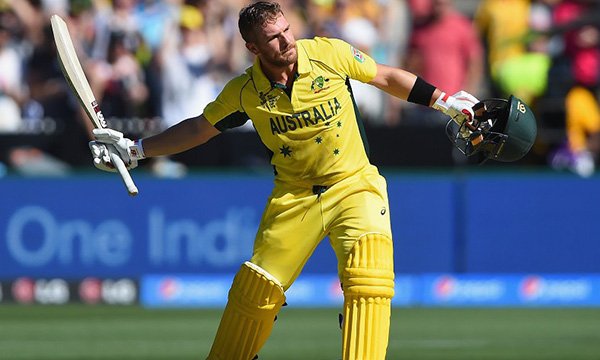 Injury has been a concern for Aaron Finch. On the other hand, who had to miss the IPL season and various tours due to it. Currently, un-fit Finch was kept away from the Australian team during ODI series against India. After getting recovered, he made an eye-opening comeback with smashing century against Blue Shirts.

Currently playing for Gujarat Lions, he has become a household name in the prestigious Indian Premier League. In fact, Finch has been in the IPL since 2010 for Rajasthan Royals. But from then onwards he failed to get hands full of chances. In short, he had to wait few years to prove his worth in IPL; during that time he passed on to play for IPL franchises Pune Warriors and Mumbai Indians. Things turned his way after he played some brilliant knocks in IPL during recent times.

The opener batsman for Melbourne Renegades didn’t take any longer to become the captain of this BBL side. He has been the consistent performer for the Renegades in the BBL over the years. He has scored 1207 runs in 32 BBL games, with maintaining an average of 43.10 and strike rate of 133.96. 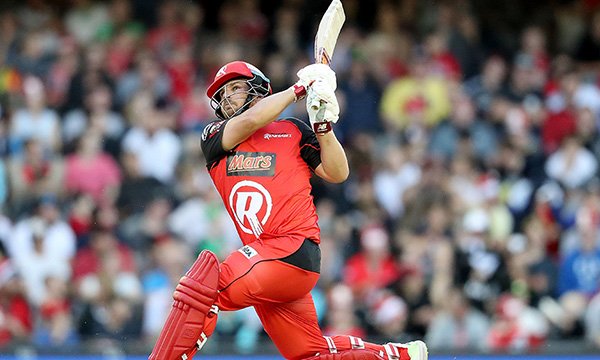